- keen sense of smell (7 times more powerful than dogs); can detect odors over a mile away

- excellent memory and remembers food sources for many years

Bears have very close tie to dogs, and behave like dogs a lot.

An adorable animal when not attacking human beings.

An almost sure death sentence when he or she decides to attack.

Bears are not highly social. Much of their communication at feeding aggregations, such as coastal meadows or salmon spawning streams, serves to maintain spacing and avoid conflict. They appear to have only a limited repertoire of behavior for this purpose. These behavior patterns are not highly ritualized, however their meaning is largely dependent on the context of the situation.

Your position in the bear's dominance hierarchy
Your behavior
The bear species
The individual bear
The bear's perception of threat
Should you encounter a bear, these general descriptions of some behavior may help you understand what a bear may be trying to tell you. But remember that each bear is an individual, each encounter is unique and you are not fluent in their language.

Standing On Hind Legs: A bear standing bipedally is typically not expressing aggression. Bears generally stand on their hind legs to gain more information, both olfactory (smell) and visual.

Woof: A startled bear may emit a single sharp exhale that lacks the harsh quality of a huff. If her cubs woof, a mother will became immediately alert to the situation.

Charging: The vast majority of charges are ones in which the bear stops before making contact: a bluff charge. The character of the charge or associated vocalizations may vary, but it is clearly an aggressive/defensive act directed at another bear or human. Bears may charge (typically ears flatten back) immediately or may display stressed or erratic behavior before charging.

Problems can result when a bear is:

Surprised by the approach of a person
Attracted to odors from improper food storage
Attracted to humans because of prior food rewards
In poor shape, searching for any food
What Can You Do?

Inquire about recent bear activity in the area.
Make your presence known to bears! Call out, clap your hands, or sing loudly, especially around loud streams, on windy days, and in areas of low visibility. Stay extra alert near food sources such as animal carcasses, berry patches, and spawning fish.
Be aware of your surroundings. Look for bear-activity signs: tracks, scat, diggings, torn-up logs, and turned-over rocks.
Carry and know how to use a bear deterrent: be it "bear spray", a weapon, "distance" or common sense.
Reacting to a Chance Encounter

If you can do so undetected, leave the area.
If the bear is approaching, and unaware, try to get out of the way without being noticed.
If you can not leave the area, let the bear sense you by smell first. Quietly move upwind, keeping the bear insight.
The bear is aware of you, but distant (200+ yards): Stay calm, continue walking slowly away from the bear. DO NOT RUN!
The bear is aware and close: bear is likely to feel threatened, no sudden movements, no direct eye contact, stay upwind, talk in a low authoritative voice and slowly wave your arms, back away slowly. Give the bear the opportunity to leave. If the bear does not leave, but comes closer or charges, stand your ground. Do not play dead unless the bear contacts you as a result of a charge.
A bear charges at high speed, ears flat, on all four legs, low to the ground. Many charges are bluffs: these bears often stop or veer to the side at the last moment. Do not play dead too soon. Doing so with a curious bear or one that is hunting and considers you prey will invite an unwanted approach.
However, if you are attacked, most wildlife experts recommend that:
If a black bear approaches, try to scare it away by shouting, making noise, or throwing small stones. If a black bear attacks, fight back!
If a black or grizzly bear attacks at night while you're in a tent, fight back aggressively with fists or solid objects.
If a grizzly bear attacks you during the day, most experts recommend that you play dead once the bear makes contact: either curl up in a ball or lie face down, using your hands and arms to protect the back of your neck and face, and keep your pack on for added protection. Do not move or make noise until you are sure the bear has left the area.
Don't Feed Bears

Feeding wildlife can put you and those with you in danger and is harmful to animals. Bears especially should never be allowed to obtain human food or garbage
Store food and garbage so bears cannot obtain it. Bear resistant food containers work well in tundra settings. Remember that allowing bears to get human food endangers both bears and people.
Please set a good example and tell others why it is important to keep all human food and garbage away from bears.
Remember: Be alert, watch for bear sign, avoid areas of restricted visibility, make noise, travel with others and carry a bear deterrent. 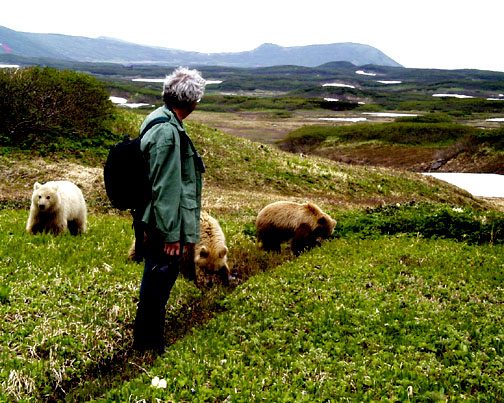 " An adorable animal when not attacking ....

An almost sure death sentence when she decides to attack."

BlueZ, you are the man.